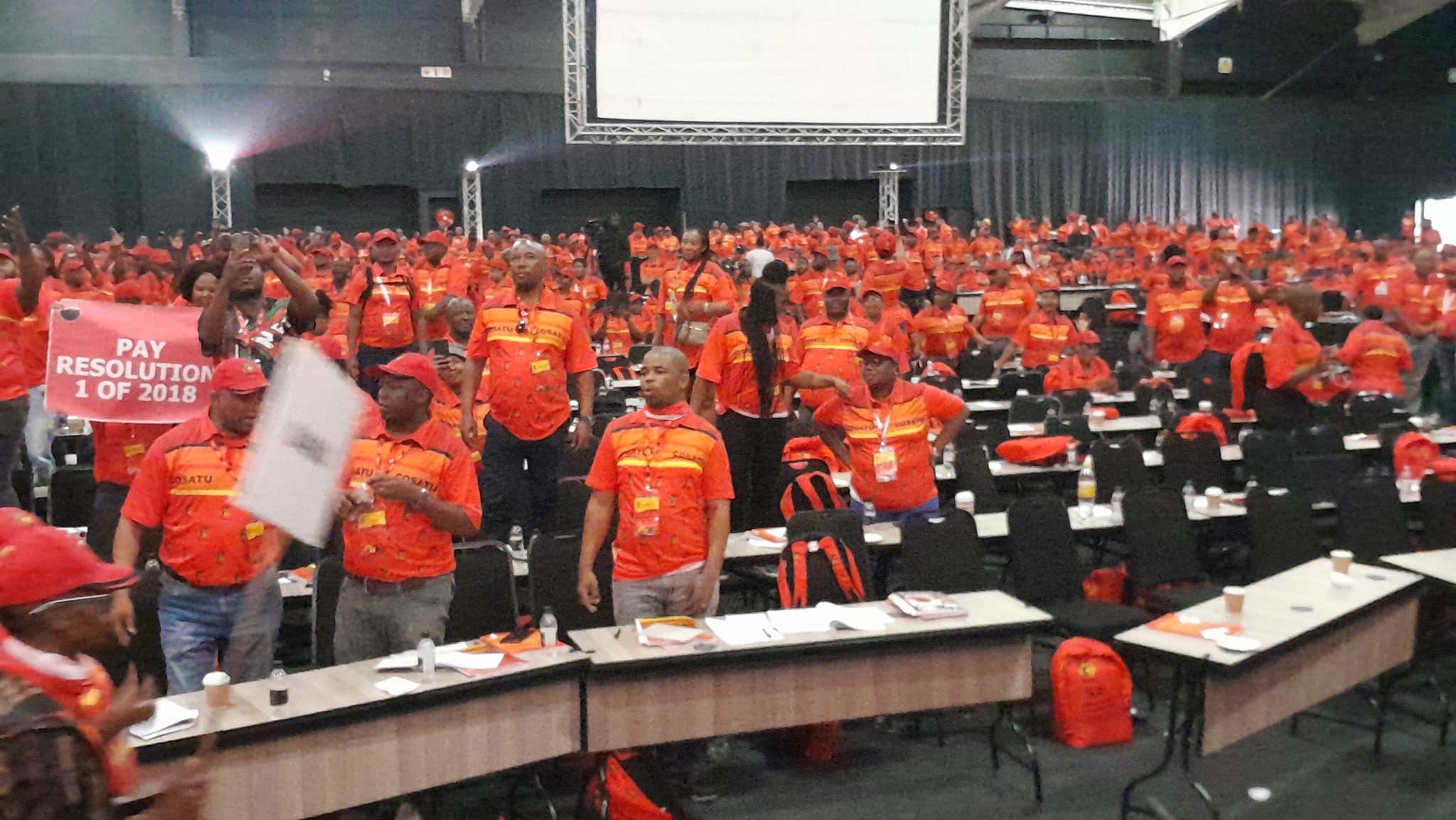 The first day of COSATU’s 14th National Congress at Gallagher Estate in Midrand focused on the political outlook in the country.

COSATU President, Zingiswa Losi, gave the political overview of the tripartite alliance for the period, and particularly on the relationship between COSATU, SACP and ANC while General Secretary, Bheki Ntshalintshali, gave an outline on the balance of forces both nationally and internationally and the challenges the forces of the left have encountered.

Unemployment, inequality and poverty are what has characterized the period, owing to a number of factors, both within the realms of controls for the ruling party as well as causal factors which are beyond the control as they are the natural effects of the global state of being. This was highlighted as the triple challenge that is choking South Africa and South Africans to death, as disposable income in every household is forever shrinking at the time when wages remain stagnant and more people join the unemployment queue.

The rising unemployment was highlighted as the biggest enemy confronting South Africa, where the picture is getting bleaker instead seeing a positive improvement in the employment rate, particularly amongst the youth.

The congress stressed the need to campaign for filling all public service posts as one leg of dealing a heavy blow on unemployment.

She informed the congress of one of the policy intervention proposals aimed at easing the hurt on the working class, which is likely to be finalized in October 2023, which Cosatu has been at the forefront of: The amendment to retirement laws as part of retirement reform, which proposes at least a once-off access to at least one third of worker’s retirement savings.

This, Losi explained, will go a long way to putting a stop to the resignation frenzy by workers who often decide to resign from work as the only means to access their retirement savings at the time it is almost impossible to find the next employment. The workers do this to save their houses or cars from repossession and their children from explusion from schools.

Once this legislation is passed, it will benefit workers both in the private sectors and those in the public sector.

ON POWER SHORTAGES AS FURTHER KILLER OF JOBS:

The continuing power shortage in the country, which continues to kill more jobs and thus giving rise to unemployment, was also highlighted and so was the government’s visible lack of interest to salvage the power utility.

The workers highlighted that COSATU must be the first line of defence against IPPs which are now prepared to be channeled down the throats of South Africans and be added to the national grid at the costs paid for by the public purse.

Workers also warned about the political elite who have since become great proxy and face of the hidden financial controllers of the economy.

The Congress highlighted and made it clear that the struggle against gender contradictions cannot be postponed or divorced from the struggles of today as it and total freedom are two sides of the same coin.

As part of federation’s strategic tasks, the congress stressed that gender is central to building social services and building of a caring mass-based organisation.

ON THE QUESTION OF THE RECONFIGURED ALLIANCE:

The Congress expressed on this question at great length as part of the reflections on the political overview.

The congress stressed that for too long the federation COSATU has been giving a blank cheque with no skeleton framework on the expectations in the advancement of the struggle for the working class in exchange for the support it gives to the ANC as the leader of the alliance in contesting state power.

The dwindling support for the ruling party at the polls was highlighted sharply as a useful signal of how fed up the masses have become. The Congress also highlighted the aloofness of those entrusted with the responsibility of political power to change the conditions for the masses for better and their increasing feeling of entitlement to leadership and political power as if it is a birth right to them.

The congress stressed the need to give flesh to the skeleton on the question of the reconfigured alliance and that the time to tiptoe over this critical matter has long passed.

The Congress stressed the likelihood of cabals in the ruling party who have reunited to push back the frontiers of progress against workers, starting with the attacks on collective bargaining at the level of the government, which is the tendency that has since been copied by the private sector employers.

The first day was solely focused on political overview as well as on messages of support from various alliances and formations. Due to some disruptions on the line-up of speakers on Day One, the messages of support are to be delivered at the start of Day Two of the congress (27 Sept).

Day Two of the Congress on Tuesday will focus, among others, on Bread & Butter issues (Socio-economic matters).

The Congress will resume at 09h00 on Day Two.