Thousands upon thousands of workers turned out in large numbers on 24 August 2022 in all major cities of the country to heed the call for National Day of Action by COSATU, where memoranda of demands were handed over to the government offices. The government was given 14 days to respond.

COSATU staged a national shutdown in protest against rising costs of living at the time when unemployment is rising. The workers marched on the streets of the cities as a sign of their protest against rising fuel costs, budget cuts, undermining of collective bargaining and killing of State-Owned entities (SOEs).

In Pretoria, the workers marched to the Union Buildings where they handed over the memoranda of demands. This COSATU march was led by COSATU 1st Deputy President, Mike Shingange.

Workers under SAFTU, which had also marched to the Union Buildings, joined the COSATU workers in delivering the memorandum of demands. Minister in the Presidency, Mondli Gungubele, received the memoranda on behalf of government.

Workers in Northern Cape marched in Kimberley to the Premier’s Office where a memorandum of demands was delivered to the Office of the Premier, Zamani Sauls. The march was led by COSATU Treasurer, Freda Oosthuysen.

In the Eastern Cape, workers marched on the streets of King William’s Town and handed the memorandum of demands to the Premier, Oscar Mabuyane.

In Western Cape, the workers marched on the streets of Cape Town where leaders handed over the memorandum.

Equally, in Mpumalanga workers under both COSATU and SAFTU gathered in their thousands in Witbank.

In the Free State thousands of workers marched on the streets of Old Puthaditjhaba. 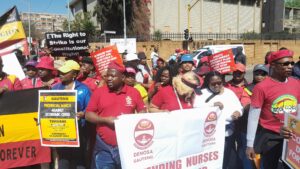 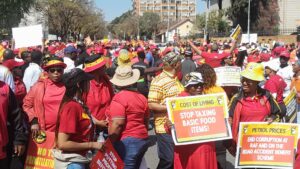